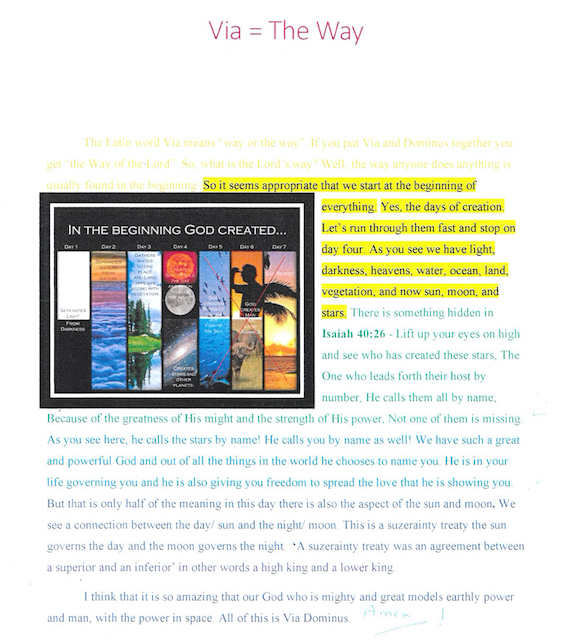 A 7th grader at Living Science recently wrote a summary for one of Mrs. D’s Life Science classes. We liked it so much that we want to share it with you.

The Latin word via means “way or the way.”  If you put via and Dominus together you get “the Way of the Lord.” So, what is the Lord’s way?  Well, the way anyone does anything is usually found in the beginning. So it seems appropriate that we start at the beginning of everything. Yes, the days of creation. Let’s run through them fast and stop on day four.

As you see we have light, darkness, heavens, water, ocean, land, vegetation and now sun, moon, and stars. There is something hidden in Isaiah 40:26 – Lift up your eyes on high and see who has created these stars. The One who leads forth their host by number. He calls them all by name. Because of the greatness of his might and the strength of his power. Not one of them is missing. As you see here, he calls the stars by name! He calls you by name as well! We have such a great and powerful God and out of all the things in the world he chooses to name you. He is in your life governing you and he is also giving you freedom to spread the love that he is showing you. But that is only half of the meaning in this day there is also the aspect of the sun and moon. We see a connection between the day/sun and the night/moon. This is a suzerainty treaty the sun governs the day and the moon governs the night. A suzerainty treaty was an agreement between a superior and an inferior in other words a high king and a lower king.

I think it is so amazing that our God who is mighty and great models earthly power and man with the power in space. All of this is Via Dominus.

We are thrilled when our students show such a strong understanding of God’s fingerprint in creation.